For the Minnesota Roller Girls roller derby game in February they played in the Xcel Energy Center, which was awesome!  The place holds a ton of people, which is great for MNRG, but presents a challenge for the T-Shirt cannon, as the calculations were set for the Roy Wilkins Auditorium.  So, I went about changing the dimensions of the cannon to shoot T-Shirts twice as far!  Bassicly, I cut the accumulation chamber in half, added a 3″ PVC T, and 13″ more of 3″ PVC pipe.  This allowed us to get the force to shoot further, but also meant that we would only get two shots out of it. 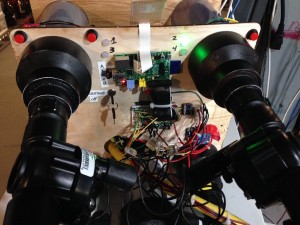 Unfortunately, in my haste to get the thing to shoot further- I cranked up the air pressure to well over 125PSI.  OOPS.  I managed to tear the sprinkler valve membrane, and render the cannon non-functional while testing it at the Arena before the game.  Thankfully I did have a 1″ PVC screw on cap that I was able put in place to fix it, so we could play “Will it launch” at the game.

I then came home and began plotting. During the game I talked backstage with one of the player’s BF.  He apparently has done a bit of work with commercial sprinkler valves, and said that they were rated for a much higher pressure then 150PSI.  So I did some investigation, and found that Toro does in-fact make a sprinkler valve that is rated for 175PSI, and can withstand 1000PSI bursts. 1000PSI?  Are you kidding?  Ok, sold.

I put in an order for them before the next derby game, and waited.  Once they arrived, I pulled them out, and they are most certainly a higher quality (not much), but were the exact same price as the valves that blow apart at 125PSI from the Big Box hardware stores. Next I installed the four new valves, and pressurized the system to about 145PSI at home.

This time when I fired the cannon, I felt a jolt, what some call kick-back.  Which, I guess is the difference between 120PSI and 145PSI. This new upgrade allows the cannon to shoot t-shirts further, and faster.  While I was at it, I updated the code so that silly things, like static electricity would stop the fantom button pushes. 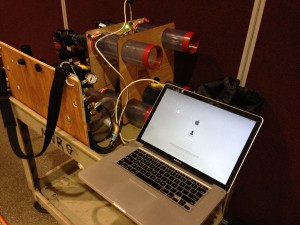 When I arrived at the Roy I started doing test fires, and found that it was going, but I wanted to go faster.  So I pulled out my laptop, SSHed into the Raspberry Pi, and updated the valve timing from 12ms to 16ms.  That several ms of time for the valve to stay open really puts some power behind it.